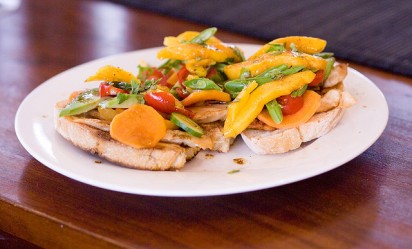 You can eat nothing, but whole grain, organic, superfoods hailed by celebrity doctors and personally blessed by an actual talk show host, but if you aren’t considering your internal microbiome, you might as well be eating shards of glass. Either way, you could be tearing your insides apart. When your gut loses balance, 100 trillion microbes which were once beneficial citizens of your internal world begin to riot. They begin feasting on your intestines like a horde of microscopic zombies.

This feeding causes intestinal lesions which have been associated with a host of the chronic diseases such as:

This autoimmune disorder takes the forms of Crohn’s disease and ulcerative colitis.

RA is an autoimmune disease that often results in bilateral inflammation of the joints.

This includes everything from toenail fungus to yeast infections.

This disease is associated with fatigue, generalized pain and sensitivity to pressure. It is heavily correlated with depression and anxiety.

Schizophrenia is characterized by a loss of contact with reality, hallucinations, false beliefs, disorganized speech and behavior, restricted range of emotions, impaired reasoning and problem solving. It results in occupational and social dysfunction.

The Illusions of Modern Nutrition

Our ancestors had a pretty good idea of what to eat and when to eat it. This wisdom was part of the collective culture. The way we ate food, fasted and prayed were all based on a collective human experience. These cultural traditions were in place to help us adapt and thrive. Not all of it made sense, but these cultural practices served a function that early 20th century science couldn’t appreciate.

The science of the 20th century was discovering many wonderful facts, but had no context for understanding how it fit into the larger tapestry of life. What remained of our culturally ingrained perspective were thought to be “old wives’ tales” and ridiculed. Because great, great grandma couldn’t back up her culture with clinical trials, her traditions were deemed unscientific and therefore assumed to be wrong. With that, we threw away our culture, the baby with the bath water. We were left with a clean slate. It promised give us a better, more scientific way of eating. What we got instead was a powerful lesson in media manipulation and human psychology. As research on food came to light, advertising companies spun it in order to fit the requirements of their clients. These random bits of incomplete science were formed a new way of eating and we swallowed them one spoonful at a time.

Food marketing companies are intensely focused on how to get you to eat more. You could outsmart them, but you are busy living your life. By contrast, their entire industry is designed to manipulate you. While you are distracted they are working at your subconscious. They incorporate the latest research in human psychology to make you buy more.

Edward Bernays was one of the first to use modern psychology for advertising because he was the first to be exposed to it. He learned how to program people from his uncle Sigmund Freud. Yes, that Sigmund Freud, the father of psychoanalysis. Bernays was shameless in using human psychology to trick people, including doctors and newspaper reporters. By using the subtleties of human psychology, he could make them say pretty much anything. He made cigarettes and bacon doctor approved. In the 1920’s Bernays got women smoking by associating it with equality. When aluminum companies needed to get rid of a waste product, he helped them, by getting it in our toothpaste and drinking water. For better or worse, he was to spend his life forming American public opinion. He was a pioneer in an industry that would literally shape us all.

Unfortunately he was far from the last advertising agent to spin science for news agencies. Research is difficult for most people to understand and often inconclusive. It’s hard to condense a research paper into an abstract. By the time it gets condensed into a headline, it’s often far from accurate. This was the information that came to replace our traditional cultures.

These sound bites of pseudo-science came from radio and television programs. Because they were incomplete and lacked context, they were constantly contradicting each other. The rules of diet seemed to shift with every few years. Were eggs good or bad? Did broccoli cause or fight cancer? Was spinach full of iron or did it cause inflammation and acne? Soda was good and coffee was evil. Then they reversed. None of this was really science. It was just advertising.

There is an ancient story which cleverly teaches us to avoid falling into these traps. A king in India once settled a debate by asking several blind men to touch an elephant. The King asked the blind men to describe what they were feeling and how it would best be used. One man grabbed the tail and said, “It is a rope. It is best used for construction projects.” Another man grabbed hold of an ear and said, “It is a fan best used for cooling the room.” The third man touched the foot and said, “It is a pillar, ideal for supporting the roof.” The last man touched the tusk and said, “This plow is perfect for tilling the fields.” 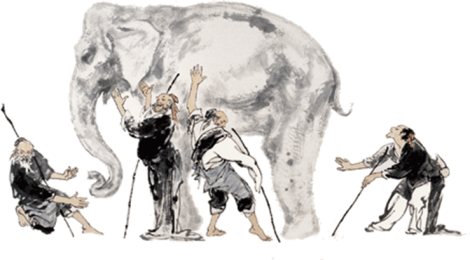 Now someone detects a heavy metal in food and concludes: “This is bad”. Another finds a vitamin and says, “This is good.” Still another finds a fat burning molecule says, “This is great!” All of them are blind men groping around in the dark. These illusions are so culturally prolific that we don’t even notice them without special training. We often say, “Eat this orange, it’s good because it has vitamin C”, or “Avoid ocean fish because of mercury”, and no one thinks twice about it. The logic is the same. The orange is not vitamin C. The fish is not mercury. Coffee is not caffeine. These are only parts and say nothing about the whole. This fallacy even finds its way into education.

Modern text books show a picture of bread and write “carbohydrates” under it and a photo of a steak and the caption reads “protein”. It’s true that there is protein in meat. It’s true that there are carbohydrates in bread. These are individual facts with no context. You can’t discover the truth about food from blind isolation; you must look for it in the light of context.

When we are told to get six serving of vegetables, it’s the same as being told to “wear six pounds of wool”. Following this logic without a living context would cause people to dress in wool randomly. You might find a man facing winter winds completely naked, except for a giant wool sombrero. He would feel confused because he was doing everything “right” yet would feel uncomfortable in the cold wind. As ridiculous as this idea is, it is the exact approach we are taught to believe when it comes to eating. School lunches are even planned according to this fallacy.

Imagine for a moment that if instead of a food pyramid, we had a fabric pyramid. The government would decide how children should dress based on the weight of fabric. All of this would have zero context on their local climate or weather patterns. Children in Alaska and Florida would all have to wear 4 articles of leather, four ounces of wool, a few feet of cotton etc.

To dress them according to this guide would leave some kids with heat stroke and leave others freezing. It would amount to child abuse and yet, this is exactly what happens with diet. This line of thinking contributes to gut dysbiosis which has been linked to chronic diseases ranging from allergies to mental illness.

The absurdity of this approach is based on confusing the part for the whole and ignoring the living context of life. It’s true that wool can be a very nice material. It’s true that vegetables can be good food source. Many of individual facts of modern nutrition are conditionally true. A wool parka and snow shoes could save your life if you are hiking through the snow. If you wear the same outfit while snorkeling, you will probably drown.

Context is everything. Once the conditions change, wool becomes a horrible material and vegetables can become poisonous. Without taking this context into account it makes everything we know about nutrition worthless. A University of South Carolina study found that the last four decades of research funded by the Center for Disease Control and Preventions (CDC) may be invalid. They didn’t take into account the influences of weather, absorption, climate, activity levels or anything else. Like the proverbial blind men touching the elephant, they focused on a single part, but were incapable of seeing the big picture.

How do you see the big picture? It’s as simple as gardening. By paying attention to your relative levels of internal heat and moisture, you can regulate the growing conditions within. By using food, breathing and movement, you can cultivate your internal garden of microbiome into a paradise. We’ll get to the particulars of this in future articles and we go into considerable detail on how to do this in our book “Enlightenweight, Cultivate the Garden Within.”

Why “Eating Right” May Be Killing You by Andrew Miles & Xuelan Qiu is licensed under a Creative Commons Attribution-NonCommercial-NoDerivatives 4.0 International License. Based on a work at enlightenweight.com.